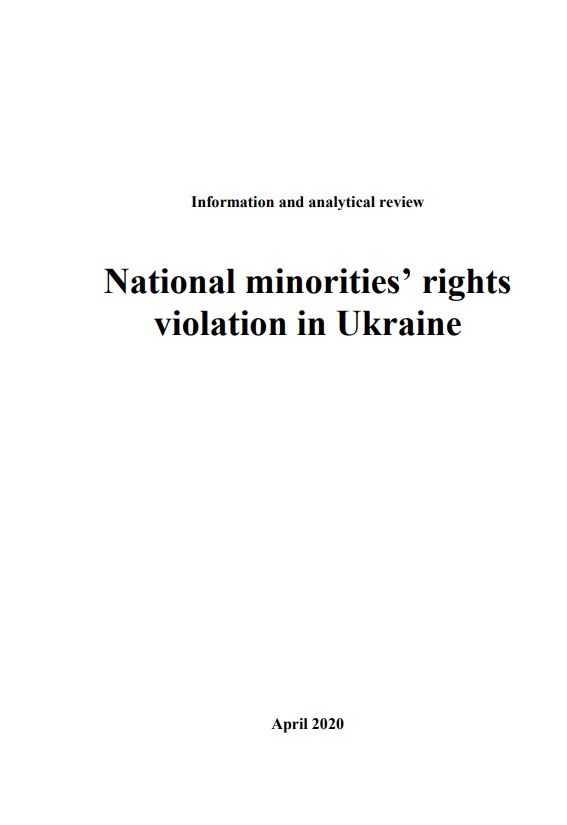 In 2019 took place complete rebooting the government in Ukraine, a new president and parliament were elected, the government changed twice - in August 2019 and March 2020. However, the new Ukrainian authorities, in spite of campaign promises, are in no hurry to change the humanitarian policy that emerged under President Petro Poroshenko.

The country continues the policy of ousting the Russian language and languages ​​of national minorities (Hungarian, Romanian, etc.) from all spheres of life.

In 2019 the law " On ensuring the functioning of the Ukrainian language as the state language" was adopted and entered into force, by which the Ukrainian language was approved as the only state language. Experts call this law the law on total Ukrainization, the action of which is to squeeze out national minorities’ languages ​​from all spheres of public life - the media, education, medicine, services, etc.

Despite criticisms of this language law, neither President Vladimir Zelensky himself, nor the Verkhovna Rada of Ukraine of the 9th convocation, in which his supporters have an absolute majority, took no steps to introduce any changes to its provisions.

Even under Petro Poroshenko, the head of the Hungarian Ministry of Foreign Affairs, Peter Siyyarto, called this legislative act “unacceptable” and expressed hope that the situation would change for the better with the entry of V. Zelensky into the post of the President of Ukraine. Six months later, Peter Siyyarto stated: Ukraine did not take any real steps to resolve the language issue.

On January 16, 2020, the norms of Article 32 of the law on the state language entered into force, according to which all advertising on television, radio, and also in print media, starting from this date, should be only in Ukrainian.

Earlier, the Law "On Education" was adopted, according to which from September 1, 2020 all Russian-language schools will have to switch to the Ukrainian language of instruction. And, despite all the protests about discrimination against the Russian-speaking population, no amendments to this law have been made. Moreover, on January 16, 2020, the Verkhovna Rada adopted in second reading and in general the law "On Complete General Secondary Education”, - which confirms the decision on the final liquidation of Russian schools as early as 2020, and schools of other national communities - since 2023.

The purpose of this review is to analyze the situation in the field of observance of the rights and legitimate interests of the national communities of Ukraine. In particular, the following topics will be reflected in the review:

- changes in national legislation affecting the interests of Russian and other national communities of Ukraine;

- Violations of the rights of national minorities by of government representatives and officials, problems of individual ethnic communities;

- cases of discrimination of citizens of Ukraine on the basis of language in various spheres of public life and in private life, violation of rights and cultural identity;

- acts of violence, attacks and other illegal actions of radical nationalist groups, inciting ethnic hatred, the use of hate speech, acts of vandalism;

- the lack of legal response from law enforcement agencies and the judicial system of Ukraine to incite national, racial or religious hatred;

- assessment of the situation with the observance of the rights of national minorities in Ukraine by international human rights organizations and institutions.

The review will also give recommendations on ensuring the rights of national minorities living in Ukraine. For clarity, some sections are provided with comments.