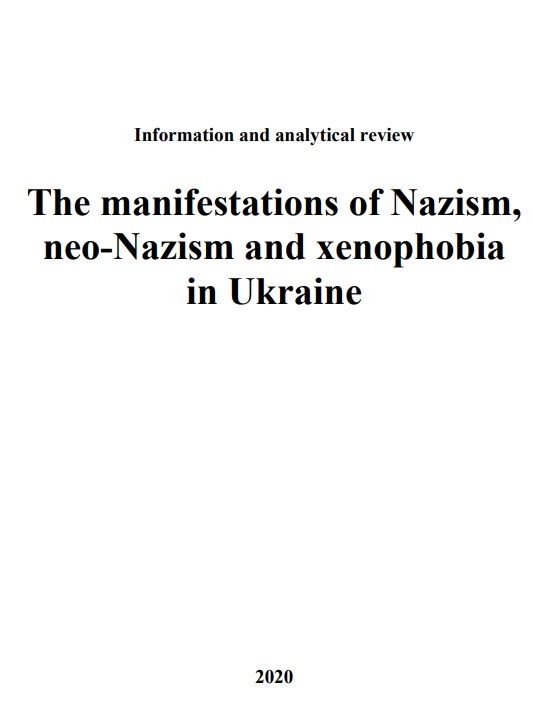 The manifestations of Nazism, neo-Nazism and xenophobia in Ukraine

After the victory of the so-called "Euromaidan", the state policy of Ukraine in the humanitarian sphere is determined by political forces professing an openly nationalist Russophobic ideology. Throughout all five years of Poroshenko's presidency, the Ukrainian authorities pursued a consistent line on rewriting history, dismantling the historical memory of the Ukrainian people about the events of the World War II, all-round suppression of the role of the USSR and the Red (Soviet) Army in the victory over Nazi Germany, glorification and exaltation of various formations Ukrainian collaborators who collaborated with the Nazi invaders during the World War II.

With the tacit connivance, or even direct support of the authorities in Ukraine, cases of neo-Nazism and xenophobia have sharply increased. The conductor of this policy was the Ukrainian Institute of National Memory (UINM), which has the status of a central executive body with the main tasks of “recreating the fair history of the Ukrainian nation” and “shaping and implementing state policy in this direction”. One of the main areas of work of the UINM, which during the time of Poroshenko was headed by V. Vyatrovich, known for his extreme nationalistic views, was numerous falsifications of the history of the World War II, the inculcation of the cult of OUN-UPA and such odious historical figures as S. Bandera and R. Shukhevych. This line of the Ukrainian authorities, however, was strongly opposed by a significant part of Ukrainian society, as evidenced by numerous sociological polls, and repeatedly provoked resonant scandals and conflict situations in Ukraine's relations with neighboring states, primarily Poland.

With the election of V. Zelensky to the post of President of Ukraine, the majority of Ukrainian citizens pinned their hopes for changes for the better in various spheres of public life. However, more than a year that has passed since Zelensky's victory in the presidential elections, we have to admit that on most key issues, including in the humanitarian sphere, the policy of the new Ukrainian government has practically not changed, remaining the same as it was under Poroshenko.

In December 2019, Ukraine, together with the United States, voted at the UN against the resolution "Fight against the glorification of Nazism, neo-Nazism and other practices that contribute to the escalation of modern forms of racism, racial discrimination, xenophobia and related intolerance" (Ukraine held a similar position throughout all five years of Poroshenko's rule).

Despite the change in the leadership of the UINM, which took place in December 2019, this institution is still engaged in the same propaganda activities aimed at glorifying the OUN-UPA and related figures. And the current head of the UINM Anton Drobovich has already managed to make a number of politically biased statements, in which he deliberately falsified the history of World War II.

Over the past year in Ukraine, there have repeatedly been new cases of vandalism and desecration of burials and memorial signs dedicated to the heroes of the World War II, as well as civilians of various nationalities who died during the war. Of particular concern is the fact that, as in the Poroshenko era, the criminal actions of vandals remain unpunished.

The purpose of this review – to bring international attention to the manifestations of Nazism, neo-Nazism and xenophobia in the political life of Ukraine in the period 2019-2020. This review, in particular, will address the following questions:

1. Analysis of the modern legislation of Ukraine aimed at glorifying Ukrainian collaborators and supporters of Nazism.

4. Acts of vandalism, destruction and desecration of burial places and memorial signs dedicated to the heroes of the World War II, as well as civilians of different nationalities who died during the war.

5. Recommendations to contrariety of Nazism, neo-Nazism and xenophobia in Ukraine.

The issues of this review seem to be especially relevant in conditions when the world community is celebrating the 75th anniversary of the Victory over Nazism in World War II.